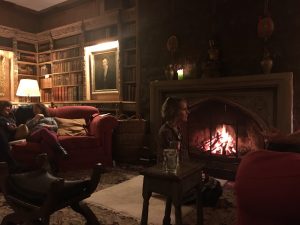 For February mid-term I treated myself to a week-long writing workshop with The Story House in Lisnavagh House in County Carlow. My mother-in-law had died three weeks previously, I was sad and I needed a rest. I had visions of sleeping in a huge fluffy bed, eating massive Irish breakfasts and dabbling in a bit of writing. That’s not what happened.

I didn’t know much about the retreat except that Sheena Wilkinson and E.R. Murry were the course directors. I had attended a master class with Sheena Wilkinson at the Mountain to Sea Festival in Dun Laoghaire in 2016, so I knew she was an excellent teacher and a super writer too. I bought her historical fiction novel Name Upon Name at that event and was impressed at how skillfully she wove historical detail into the story. I also met E.R. Murry at the C.B.I conference in 2015 and found her friendly and interesting – she lives in a mobile home in one of my favourite places in Ireland – Schull in West Cork. Other than these two key details, I didn’t know much about Story House as I hadn’t read their website and had only seen a picture of Lisnavagh House, which looked gorgeous.

Lisnavagh House did not disappoint. It is a large old house surrounded by interesting trees, snowdrops and purple crocuses. Horses graze in a field on one side of the drive and pheasants flutter by. I felt quite tearful on arrival. I was staying here for five nights. Utter bliss!

However, it wasn’t long before found out I was not staying in the beautiful old house. Instead I was shown to the stables and told a story about a famous racehorse having been born there. That was all very well, but where was my four poster bed? Where was my stand alone bath? All I found were two damp water troughs, a medium sized bed and an en-suite shower in a freezing cold cupboard. However, like a polite Irish girl, I nodded my head and said everything was ‘lovely’ and attempted to settle in.

Thankfully dinner that evening took place in the large house. Lucky for me I sat next to E.R.Murray and it turns out that she is as madly in love with her massive dog, Franklin, as I am with my beloved Beau so we swapped photos and stories, making me feel right at home. After dinner, Margaret, one of the organisers, made a speech about how we should be kind to ourselves during the week, take naps and go for walks. I nodded, blinking back tears. It was exactly what I needed to hear.

The next morning, there was no large fry. I was directed to help yourself granola, green tea and bananas in a freezing cold barn. It took the rest of the morning for my body to warm up. But I did warm up. All week long, I warmed up. Everyday I perched myself next to the largest fires I’ve ever seen. My fellow participants, knowing how I loved the heat, kindly made space for me on the sofa and at their feet so that I could touch the warm flagstones. And from this position I wrote and I learned more about writing than I have in a very long time.

A Story House writing retreat is not a week of lazy luxury, as I’d imagined. It is, as Maraget said, “All about the writing.” Our morning workshops kicked off bang on 10a.m.(thanks Sheena) and covered world building, plot, setting, character, endings and beginnings and every aspect of writing you can possibly think of. Sheena Wilkinson and E.R. Murry shared their writing processes, sucesses and failures, and insecurities so openly and honestly that I felt as if I was allowed inside their heads. It was a great privilege and so comforting to know they’re not unlike me.

Then, on Wednesday evening, the guest writer (and comedian it turns out) Patricia Forde appeared. Like Sheena and Elizabeth, Patricia was completely candid about her experience of writing and getting published. One thing she said changed everything for me. I’d had a tutorial with Sheena Wilkinson that afternoon and realised I was facing a complete re-write of my teenage novel. I was feeling very sorry for myself until Patricia told us her story. Several years previously she’d written 75,000 words of her novel The Word Smith. Her agent told her the premise was wrong and she must re-write the whole book. In full tantrum mode and to lick her wounds, she’d attended an Arvon mentored writing retreat in Scotland. There the writing tutor/ mentor listened to her woes and asked her a question.: “Who do you write for? Your agent?” Of course, the answer was no. She didn’t write for her agent, she wrote for herself and she wrote for the joy of it. She wrote because she had to write, and I realised that I am exactly the same. I have to write. So it doesn’t matter if I need to re-write my novel. I want to write something anyway, it may as well be this novel, which I completely love and believe in.
Later that evening Patricia sat beside me on the sofa and I told her how I appreciated her tale as I found myself also in tantrum mode – facing a re-write. Wisely, and with her head to one side, she told me to start writing the novel from the very beginning. “You mean from scratch?” I gasped. “Yes. You know the whole story. You know how it ends. Just write it down.” And the very next morning that’s what I did. I began writing my novel again and I’m still doing it now.

I feel incredibly blessed and privileged to have taken part in the Story House Workshop Retreat. Yes, I had to cook dinner one night (it was great fun), yes, I made my breakfast in a barn with doors that slammed in the wind, but I had a super chat in that barn with my fellow participant Chris from Massachusetts. With the heating on full-blast, I had cosy bed, a dry ensuite bathroom and I benefited hugely from the kindness and wisdom of the writing directors, Sheena and Elizabeth,the organisers, Maragaret and Nollag, and my fellow participants from all over Ireland and one from the U.S. If you are serious about your writing and you can get the cash together, go on a Story House Writing Retreat. It’s the best thing I’ve done for my writing – ever.

Most memorable quotes of the week:

“Who are you writing for?’ Patricia Forde

“Writing is as valid as going for a walk.” E.R. Murray

“Get in the moment.” Sheena Wilkinson.

“Be kind to yourself.” Margaret O’Brien

I am a writer and teacher of Creative Writing to children, teenagers and adults in Dublin.

On this site you’ll find information about the courses I run, my short stories and latest writing projects.

My two passions, writing and teaching, complement each other beautifully and I hope to share at least one of them with you.