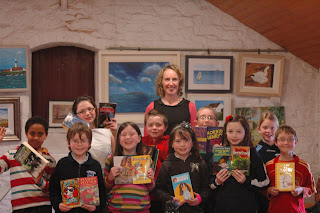 What a wonderful bookie week I’ve had. It all began at the Gutter Bookshop in Temple bar on Tuesday evening, at the launch of Shirley Benton’s debut novel ‘Looking for Leon.’ Shirley has been working hard at her writing for years, and has been a great support to me. I was delighted to see her beat the odds and get published.

The next event in my bookie week was World Book Day, which I celebrated all week long (as did many other wise people). I asked students to bring their favourite book to class and also a book they no longer wanted (one student brought in about seven!) We then spent an enjoyable half hour listening to recommendations and swapping books. I went home with Yann Martel’s ‘Life of Pie’ (one of my favourite reads), Kate Kerrigan’s ‘Life of Grace’, and Roald Dahl’s ‘Georges Magical Medicine’. I was very pleased.

And I rounded up the week by attending the Dublin Book Festival in City Hall yesterday afternoon. It was such a treat! The hall has a very high-domed ceiling, decorated like the inside of a cathedral, grand columns and huge glass doors looking down onto Parliament Street. It’s a building to be proud of and so were the Irish books and writers inside. I had the pleasure of listening to Yvonne Cassidy and Nuala Chonchúir read from their novels ‘The Other Boy’ and ‘You’. The title of the session was ‘Be Inspired’. I was. I heard Ivy Bannister give hot tips on how to win Short Story Competitions. She has won a load. Her honesty was wonderful; she checks out the judges work and uses subject matter and language that they like. She even once used the same adjective ‘Spikey’ in a story that a judge had used- and it worked! Mary Malone told us how winning a short story competition helped launch her career as a novelist, and Kate Kerrigan told us she spent ten years writing short stories and failing miserably ( I found that very encouraging – Look where she is now!)

It was such a wonderful week and now we have Dublinswell to look forward to on 18th March, followed by the Dublin Literary Festival in May.

I love being a writer in Ireland. It’s THE place to be.